Winner announced in the 2021 Henfrey Prize for Composition

This year’s final concert was held on Friday 11 June in the Bernard Sunley Lecture Theatre.

The virtuosic professional new music ensemble, Trio Atem, performed new compositions by four University of Oxford student composers. Following the concert, in which each of the compositions were performed twice, composer Judith Weir, Master of the Queen’s Music, selected one to be the recipient of this year’s £1,000 prize.

The student composers to reach the final were:

Each worked with Trio Atem and Judith Weir over the course of three intensive workshops between October and April to compose and revise their compositions for flutes, voice and cello.

This year’s prize was awarded to Jonty Lefroy Watt for his composition, Self Portrait with Rain, a setting of a text by Oxford law student, Annie Fan (St Hugh’s). 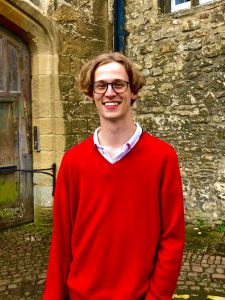 Commenting on his win, Jonty said: ‘It has been a privilege to work with the incomparable musicians of Trio Atem, whose commitment to the project throughout both the workshops and the final concert was invaluable. I am of course over the moon to have been selected as the winner, but the real joy came from being a part of such a wonderful occasion and working alongside such inspiring composers and musicians.’

The Henfrey Prize is such a unique opportunity for young composers to work closely with professional musicians to develop their compositions and hear top-level performances of their work. It is a fantastic incubator for the generation of new and exciting chamber music. This year’s slate of final compositions really demonstrated that.

The Henfrey Prize for Composition was established in 2017 by St Catherine’s Domus Fellow, Dr Anthony Henfrey, and has been adjudicated by some of Britain’s top composers including Catz alumnus Mark Simpson (2008, Music), Emily Howard and the late Anthony Payne.

Read more about the prize here.