Home › About Us › College History

Royal Commission proposes the creation of a category of Non-Collegiate Students as part of its recommendation to reform Oxford and Cambridge Universities.

Censor Bullock obtains agreement from the University to turn the Society into a fully residential college.

The College receives its Royal Charter of Incorporation and HRH The Duke of Edinburgh becomes Visitor.

Ceremonial opening of the College by Harold Macmillan as Chancellor of the University.

Women first admitted to the College.

The Cameron Mackintosh Foundation endows a Chair of Contemporary Theatre, establishing a visiting professorship at the University held with a Professional Fellowship at St Catherine’s College.

The College celebrates its 50th anniversary.

The College celebrates 150 years since its founding as the Delegacy for Unattached Students.

Although often viewed as one of the more modern colleges in Oxford, St Catherine’s can trace its roots back to 1868, when a ‘Delegacy for Unattached Students’ formed. This delegacy, created in response to the recommendation of a Royal Commission, enabled students to be members of the University without being a member of a college, thus avoiding the prohibitive costs of an Oxford college. Initially occupying just one room, with students living in affordable lodgings around Oxford, the Delegacy quickly banded together in quasi-collegiate fashion.

In 1884 the Delegacy was renamed as the Delegacy for Non-Collegiate Students, but lack of an identifying name for social and sporting purposes continued to frustrate students. In response to this problem, the Boat Club and other groups began using the name St Catharine’s (sic) Club, taken from a hall used for club meetings. The spelling later changed to St Catherine’s, and in 1931 the Delegacy was officially renamed the St Catherine’s Society.

In 1952, historian Alan Bullock became Censor (Head) of St Catherine’s Society, bringing with him strong leadership and a vision to develop further. In 1956, with the University considering plans for expansion, Bullock obtained approval to transform St Catherine’s Society into a fully residential college.

In 1960 almost eight acres of Holywell Great Meadow was acquired from Merton College and the College’s chosen architect, Arne Jacobsen of Denmark, began to implement his design. His modernist masterpiece was to become the most important 20th-century collegiate building in Oxford, and is now Grade I listed.

In 1962 St Catherine’s College opened its doors (while still under construction) with Alan Bullock as its first Master. The first undergraduates were admitted, and were quickly dubbed the ‘Dirty Thirty’ owing to the lack of running hot water. 1964 saw the ceremonial opening of the College by the then Chancellor of the University, Harold Macmillan, and ten years later in 1974, staying true to its forward-looking ethos, it became one of the first colleges to admit women.

For those wanting to find out more about the history of St Catherine’s College there is a dynamic and lively compilation available called St Catherine’s, Oxford: A Pen Portrait: a memorable tribute to St Catherine’s past and present. 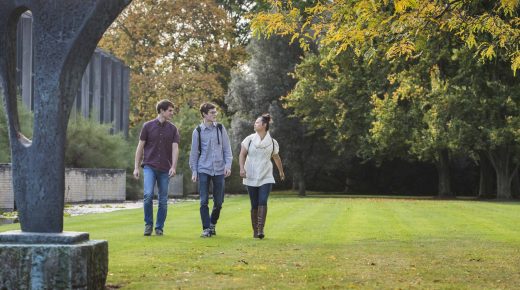 Founded in 1962, St Catherine’s College is the University of Oxford’s youngest college to teach both undergraduate and graduate students,...

Discover more about the St Catz campus by using the interactive map below. Watch videos from around the campus including...