Philip Torr, Catz Fellow and Professor of Engineering Science has been made a Fellow of the Royal Society.

This prestigious award is granted to individuals working in academia who have made ‘a substantial contribution to the improvement of natural knowledge, including mathematics, engineering science and medical science’.

Professor Torr oversees the Torr Vision Group, based in the Oxford Robotics Institute and part of the University of Oxford’s Department of Engineering Science.

The Group conducts research on ‘computer vision’: how computers ‘see’ or understand images. Its current emphasis is on real-time understanding and reconstruction of the world around using mobile cameras. 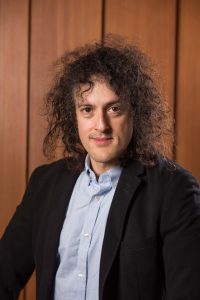 This type of technology will only gain in importance as the world becomes more automated, with technology like driverless vehicles depending on it.

Philip (pictured), said: ‘It is an incredible honour to receive this award. Often, modern science is a collaborative venture and the work that I have done has involved many people.

‘As such this award is not just for me, but also in recognition of the many outstanding scientists I have had the pleasure to work with, in particular the students and post-docs of my team, and also my collaborators and mentors, without whom over the years so much progress would not have been possible.

‘I am very interested in how computer vision can help society and believe this fellowship will very much further that aim in the future years.’

Philip’s admission to the Fellowship of the Royal Society demonstrates his distinguished contributions to the field. He is already a Fellow of the Royal Academy of Engineering and is in receipt of the International Association for Pattern Recognition (IAPR) Fellow Award. He also receive the Marr Prize – the highest honour in vision – in 1998.

Sir Adrian Smith, President of the Royal Society, commented: ‘This is the first year of my presidency at the Royal Society and I’ve been very much looking forward to welcoming the newly elected Fellows and Foreign Members.

‘The global pandemic has demonstrated the continuing importance of scientific thinking and collaboration across borders. Each Fellow and Foreign Member bring their area of scientific expertise to the Royal Society and when combined, this expertise supports the use of science for the benefit of humanity.

‘Our new Fellows and Foreign Members are all at the forefronts of their fields from molecular genetics and cancer research to tropical open ecosystems and radar technology. It is an absolute pleasure and honour to have them join us.’

The Royal Society’s fundamental purpose is to recognise, promote and support excellence in science and to encourage the development and use of science for the benefit of humanity. You can find out more on its website.

Professor Philip Torr did his DPhil at the University of Oxford. He left Oxford to work for six years as a research scientist for Microsoft Research, first in Redmond, USA, in the Vision Technology Group, then in Cambridge founding the vision side of the Machine Learning and Perception Group.

He then became a Professor in Computer Vision and Machine Learning at Oxford Brookes University. In 2013 Philip returned to the University of Oxford as full professor where he established the Torr Vision group. He is founder of several companies including Oxsight and AIstetic.