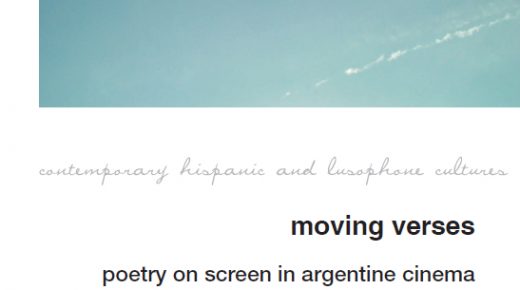 From Wild Tales to Zama, Argentine cinema has produced some of the most visually striking and critically lauded films of the 2000s. Argentina also boasts some of the most exciting contemporary poetry in the Spanish language. What happens when its film and poetry meet on screen? Moving Verses studies the relationship between poetry and cinema in Argentina.

Although both the 'poetics of cinema' and literary adaptation have become established areas of film scholarship in recent years, the diverse modes of exchange between poetry and cinema have received little critical attention. The book analyses how film and poetry transform each another, and how these two expressive media behave when placed into dialogue. Going beyond theories of adaptation, and engaging critically with concepts around intermediality and interdisciplinarity, Moving Verses offers tools and methods for studying both experimental and mainstream film from Latin America and beyond.

The corpus includes some of Argentina’s most exciting and radical contemporary directors (Raúl Perrone, Gustavo Fontán) as well as established modern masters (María Luisa Bemberg, Eliseo Subiela), and seldom studied experimental projects (Narcisa Hirsch, Claudio Caldini). The critical approach draws on recent works on intermediality and 'impure' cinema to sketch and assess the many and varied ways in which directors 'read' poetry on screen.