Today (Thursday 10 June 2021), HRH The Prince Philip would have celebrated his 100th birthday.

Visitor to St Catherine’s, Prince Philip came to the College on many occasions since its foundation. With the help of archive material and some of those who met him, we take a look back at the Duke’s time at Catz.

As this page contains archive material, it is best viewed on a device with a larger screen. If on a mobile device, this should be turned landscape.

Prince Philip first visited St Catherine’s with Her Majesty the Queen in 1960, to lay the foundation stone of the new St Catherine’s College buildings. He later accepted an offer to become the College’s Visitor, a formal, ceremonial position (click to enlarge newspaper cutting).

The Duke’s first visit to College as Visitor was in May 1964, when its iconic, modern buildings were still under construction. On this day, Prince Philip also collected an honorary doctorate from the University.

1964: Memo from Alan Bullock about the Prince's visit

1964: Prince Philip with Harold Macmillan, former Prime Minister and then Chancellor of the University of Oxford

1964: Cover of the order of service for the Prince's degree ceremony

Students always played a key part in the Duke’s visits. When returning to St Catz later that decade, in February 1968, as well as sitting at High Table, Prince Philip chose to spend a large proportion of his time interacting with students. Alumnus Richard Cassidy remembers it well…

As they almost say, if you can remember the 1960s, and Prince Philip’s visit to the JCR, you weren’t there. But I think I dimly recall a few glimpses of a visit which left me with a favourable impression of a prince who wanted to listen and learn.

My recollection is that Catz in the late 1960s was not terribly interested in the monarchy, one way or another. There had been a brief flurry of amusement when the New Statesman suggested that Prince Charles should go to Catz (rather than Trinity, Cambridge), on the grounds that Catz was the least stuffy and élitist college in Oxbridge – obviously, the thought that a royal might go to any other university was too radical even for the Statesman.

Otherwise, the royal family were not much on anybody’s mind. The radicals were more engaged locally by the Hart Report on staff-student relations, and globally by the Vietnam War. The rest of us were either working or, um, otherwise engaged. So the news of a royal visit was met with indifference, mixed with the unthinking repetition of the dismissive Private Eye tag ‘Phil the Greek’.

We were told that Prince Philip would visit the JCR after dinner, and that the JCR Committee should be ready to greet him (I was on the committee as NUS rep). We expected a perfunctory royal walkabout, a few hands shaken and platitudes spouted, and then he’d be off again. And that was how it started.

We had seen, from a distance, the Prince processing through the quad with University and College grandees, then sitting at high table. After dinner, we waited for a long time for him to appear in the JCR. Inevitably, just as somebody said, very loudly, that it was all a con and we should go and have a drink, he appeared in the bar. The committee formed a ragged welcoming line, and went through the predicted ritual of shaking hands and meaningless chat:
‘You’re the NUS representative? How did you get that job?’
‘Nobody else wanted it.’

But then somebody offered the Prince a drink, and he sat down in the pit and invited everybody to join him and have a chat. Rather than the expected royal visit waffle, or a royal monologue, he started asking questions, and actually listening and responding to the answers.

The main topic, I think, was student discontent, then much in the news, what was causing it, and what should be done. The Duke was clearly more interested in learning what other people thought than in laying down the law, and engaged in a serious conversation on equal terms with a bunch of hairy malcontents.

At the end of the visit, I think that most of us were genuinely surprised that the Prince had taken the time and trouble to discuss the issues then concerning students, rather than going through the motions of yet another official duty.

Above all, we were left with the impression of a man who wanted to hear other people’s views, to ask questions and listen to the answers, rather than just spouting his own opinions and expecting to be heard in respectful silence. It was not what we had assumed a royal visit would be, and left me, and I think others, unexpectedly impressed.

The 1968 visit was particularly significant to the College as it formed part of its centenary celebrations: marking 100 years since the Delegacy for Unattached Students, St Catherine’s predecessor institution, was formed.

The Duke visited again in 1989 when the College celebrated another key milestone in its history: the 25th anniversary of the ceremonial opening in 1964.

Brian Smith, Master at the time of this visit, recalls: ‘He came to a lunch to thank the many benefactors, who 25 years earlier had contributed funds for the new College buildings. He then spent generous time in conversation with the undergraduates and the domestic staff.’

Prince Philip also wrote a letter of congratulations to the College.

1989: Letter of congratulations from Prince Philip

Visits from Prince Philip to the College, though, were not always formal occasions, as Brian Smith, pictured above, remembers. ‘The Palace phoned to ask if the Prince could spend some time with us at the Lodgings during an unofficial visit to Oxford. We had no idea of the agenda.

‘The Duke arrived driving his Land Rover accompanied only by a security officer and came in for tea. He chatted very casually, telling my wife Regina and me about his recent trip to New Zealand.

‘He explained that this was a private visit and he didn’t want the Lord Lieutenant of the county to know, otherwise he would be surrounded by police. He added that if the IRA wanted to harm him they could do it almost any day and he did not want to be restricted by a massive police presence.’

The Duke returned to Catz soon after to formally open newly built student accommodation, Staircases 16, 17 and 18, and to join members of the College for lunch. A plaque unveiled by the Prince remains in place, marking the visit.

1995: Invitation to the Prince's visit

1995: The plaque unveiled by Prince Philip

The Duke’s final visit to St Catherine’s was in 2005, when he officially opened the College’s new buildings. A plaque remains in place close to the College Lodge.

2005: The plaque unveiled by Prince Philip

Prince Philip did not visit St Catherine’s again, but did remain involved in College life. In 2011, Nathan Jones, then a Catz student and Co-Chair of the student Ball Committee, was invited to meet the Prince at Buckingham Palace…

I remember travelling to Buckingham Palace from Catz in some trepidation, invited to an audience with Price Philip to present him with a complimentary ticket to attend the 2011 Ball – the first to be held on College grounds in decades. Exactly a week before we were due at the Palace, Prince Charles and the Duchess of Cornwall’s car was attacked by student protestors unhappy at the coalition Government’s tuition fee hikes. We feared a frosty welcome and the lash of that notorious wit.

Nearing 90, it was obvious that Prince Philip had lost none of his characteristic insight, intensity of thought and technical prowess. I still remember those eagle eyes darting wildly around as he weighed up our responses to his questions. He opened by pointing out that the Ball was happening outside in February and asked what thoughts we had given to heating. 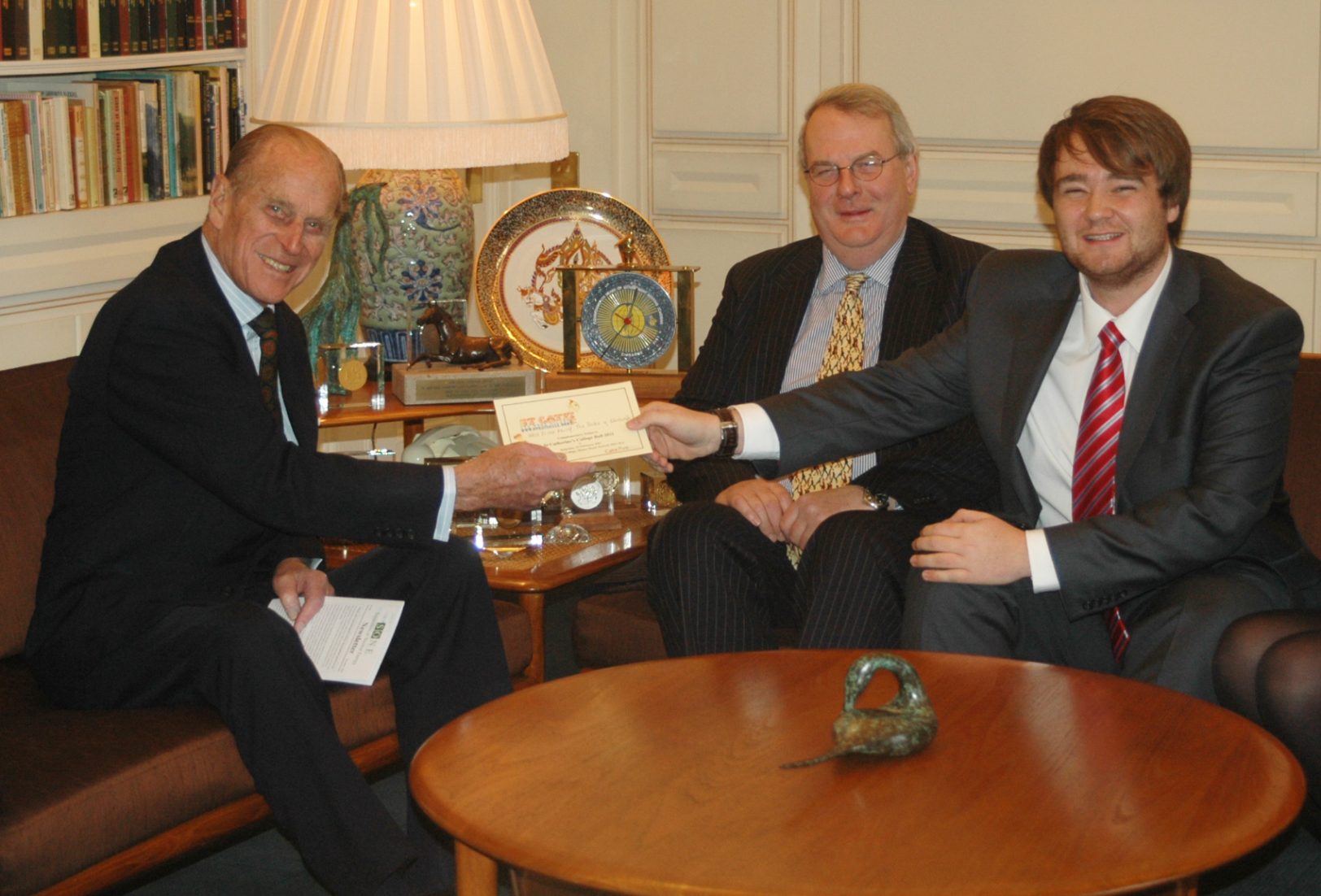 His understanding of the precise technicalities of outdoor heating came as a surprise but looking back, it meant so much to us that he didn’t patronise. He gave us the attention and scrutiny he would give to professionals – and, at a time when our pre-Ball anxiety was high, this was extremely reassuring.

I hope that Roger Ainsworth, would forgive me for revealing that he incurred one of Prince Philip’s famous ripostes after he suggested that Catz graduates were finding employment hard to come by. The Duke disagreed. In his many conversations with young graduates including Duke of Edinburgh Award recipients, he was finding them to be among the most resilient and creative of any of their predecessors.

I was 20 when we met – when he was my age, he was serving aboard HMS Valiant waging war against fascism. It was obvious to me which generation was made of sterner stuff, but I wasn’t about to challenge him!

For someone who spent a lifetime following two steps behind The Queen, comments like these proved he had a leader’s selfless sensitivity to the needs of his audience. They inspired me, along with his lifelong sense of duty and love of country, long after the Ball guests had stumbled home.

HRH The Prince Philip served as Visitor to St Catherine’s from its founding in 1964 until his death earlier this year. We are grateful for the time the Duke gave to the College over almost six decades of service in this post.

On this day, at 6.30pm, St Catherine’s College will sound its bells in honour of the Duke, before the Master and fellows dine, with speeches remembering the Prince.

We thank former Master Brian Smith, and alumni Richard Cassidy and Nathan Jones for their contributions to this piece. Thanks also to the College Archivist for access to these documents.