Two members of the Catz community have been awarded prestigious prizes for their DPhil theses.

Talita was awarded a Special Mention of the English-Speaking René Cassin Thesis Prize 2020.

Her thesis is entitled Retroactive Recharacterisation of Crimes and the Principles of Legality and Fair Labelling in International Criminal Law.

Talita’s research delves into the reclassification of historical crimes as ‘new’ crimes, for example when suspects are tried under more serious laws that didn’t exist during the time the crimes were committed.

Perhaps a well-known example is when perpetrators of WWII Nazi atrocities were tried in Nuremberg under the new offence of ‘crimes against humanity’, which was created only after the offences took place.

The main contention of the thesis is that a fairer and more consistent approach to fair labelling of crimes will result in greater confidence in domestic and international justice systems.

Luigi received one of this year’s ATLAS Thesis Award. The awards are given by the ATLAS Collaboration, which works at CERN, the European organisation for nuclear research. ATLAS has around 5,000 members, of which 1,200 are PhD students, and the best PhD theses are chosen each year.

Luigi’s thesis is entitled Muon reconstruction performance and constraints on off-shell Higgs Boson production and the Higgs Boson total width with the ATLAS detector and charm production at low transverse momentum with the CDF detector.

His thesis used data he collected while working at CERN, observing and measuring the Higgs boson particle. The Higgs boson is one of fundamental building blocks of the universe and was first discovered in 2012. 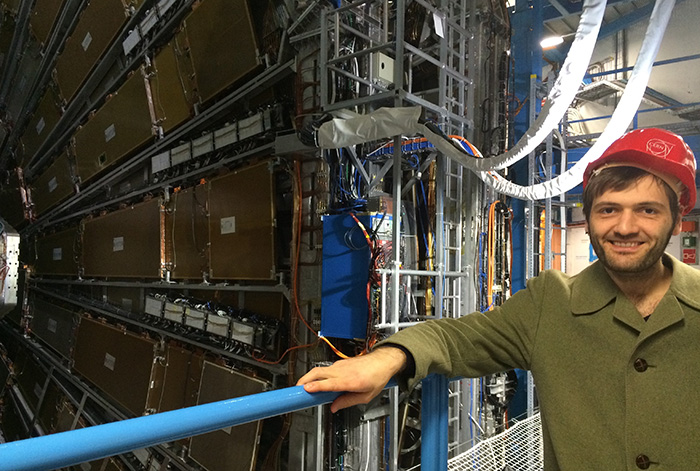 Luigi in front of the ATLAS detector, at CERN

During his research he conducted a number of key experiments, including measuring the ‘width’ of Higgs boson particles, allowing greater understanding of their rate of decay. He also helped assess the testing equipment itself, ensuring that readings remain both accurate and reliable.

The recipient of a scholarship from Catz enabled Luigi to spend more time at CERN, giving him the experience and machine-time to collect data. His DPhil supervisor was Professor Ian Shipsey, Catz Fellow and Professor of Experimental Physics.

Luigi was also involved with many outreach programmes, giving tours and welcoming guests to CERN, including the then UK Foreign Secretary Boris Johnson and Dr Patrick Vallance, Chief Scientific Adviser to the UK Government.

Luigi commented: ‘I am deeply honoured to have received this award. It’s the perfect conclusion of four wonderful years with the ATLAS Collaboration. It has been a privilege to contribute to different areas of the experiment, from data-taking operations, to several physics results, performance studies and outreach activities.

‘I will, for sure, never forget some busy nights in the ATLAS Control Room and the happiness when we published the paper on the Higgs boson width, improving our understanding of this special particle in the evolution of the Universe.’

Luigi is now a Postdoctoral Researcher at ETH Zurich, another collaboration at CERN.