Alumnus Arnold Freedman (1949, Medicine) died in November 2017, bequeathing his violin – a highly valuable instrument with remarkable heritage – to St Catherine’s. Arnold hoped that the violin would be played by students and it has been agreed that the instrument will be loaned on a yearly basis to a violinist within the College. The student loaned the violin in 2018-19 is Elizabeth Nurse (2018, MSt Music). Elizabeth has unearthed the story of the violin’s provenance. She writes:

‘This violin, which is a composite instrument, has a fascinating heritage. The latest expertise suggests that it was ‘remade’ in the early twentieth century by W.E. Hill and Sons, who helped establish a market for violins. Bruno Guastalla of Oxford Violins speculates that Hills might have bought boxes of violin parts, fashioning them together to form a sellable product.

‘The centrepiece of the Freedman Violin is a beautiful one-piece slab-cut back by Francesco Rugieri, possibly dating from the 1680s-90s. Rugieri worked in Cremona, Italy, within what one might call the ‘golden age’ of violin making. The front of the violin is newer than the back. Looking closely, ‘joints’ can be observed – for example, on the scroll, made up of three parts – yet the violin’s appearance is consistent because visual aesthetics were important to Hills. It is difficult to ascertain the effect that restoration has had on the sound. In its current configuration the violin combines projecting power with a mellow and rich singing quality.’ 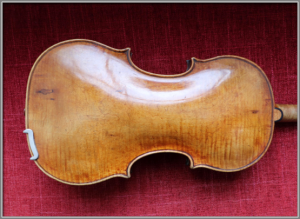 Arnold Freeman was a consultant ophthalmologist in Oxford but was always a keen violinist and in the late 1990s played chamber music regularly with Professor Richard Parish, now an Emeritus Fellow and Dean of Degrees. Arnold was very fond of the college and used to come weekly to SCR dinner. Richard recalls, ‘He was very convivial. We talked about concerts we’d been to and music we liked. At some point I must have said, “Couldn’t we play some sonatas together?” We mostly played famous duo sonatas by composers like Beethoven and Brahms’. Although Arnold retreated from college towards the end of his life, Richard remembers that it was established for decades that he would give his violin to the college. 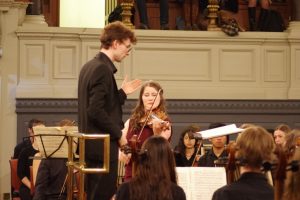 It is tremendously helpful for aspiring musicians to have access to high quality instruments on which to improve their skills and musicianship, and it is hoped that the Freedman violin will encourage applications to Catz. Further, it will, of course, be a pleasure to hear this fine violin in concerts. At an informal concert on 20 June to celebrate the gifted violin, Elizabeth Nurse played movements from Dvořák’s Sonatina with Richard Parish at the piano, as well as some Handel and Bach with an ad hoc group of players drawn from the SCR, MCR and JCR.

With thanks to Oxford Violins and to Professor Richard Parish.
Photos: Cosima Gillhamer (Instagram: iridescent.photo.graphy)