Professor McCormick, who is Francis Goelet Professor of Medieval History at Harvard University, will be speaking on “Climate, History and Change: Reflections on a 21st-century challenge“. 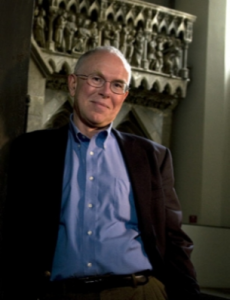 McCormick received his Ph.D. from the Université catholique de Louvain in 1979. He served on the faculty of the Department of History of the Johns Hopkins University from 1979 to 1991, and was Research Associate at Dumbartons Oaks from 1979 to 1987. He came to Harvard in 1991, where he is presently the Francis Goelet Professor of Medieval History and chairs the new University-wide Initiative for the Science of the Human Past at Harvard (SoHP), an interdisciplinary research networks that brings together geneticists, archaeological scientists, climatologists, environmental, computer and information scientists, humanists and social scientists in order to explore great questions of human history from our origins in Africa to our migrations across the globe.

His most recent book is Charlemagne’s Survey of the Holy Land: Wealth, Personnel and Buildings of a Mediterranean Church between Antiquity and the Middle Ages (Dumbarton Oaks-Harvard University Press, 2011).

He is a Fellow of the Medieval Academy of America, the American Philosophical Society, the Society of Antiquaries, London, the American Academy of Arts and Sciences, and a Corresponding Member of Académies des Inscriptions et Belles-Lettres de l’Institut de France, and of the Monumenta Germaniae historica.

He is general editor of the Digital Atlas of Roman and Medieval Civilizations and its innovative free data distribution site. His current research interests focus on developing new archaeological, scientific and textual approaches to the fall of the Roman Empire.