St Catherine’s College is deeply saddened by the news today of the death of His Royal Highness The Prince Philip, Duke of Edinburgh.

As Royal Visitor to St Catherine’s, Prince Philip played an active role in the life of the College through his presence at a number of events since the foundation of the College in 1962.

Born on the Greek island of Corfu in 1921 into the House of Schleswig-Holstein-Sonderburg-Glücksburg, Prince Philip spent his early years in Greece, France, Germany and the United Kingdom. During the Second World War he served in the Royal Navy, first as a sub-lieutenant on HMS Wallace, and later as lieutenant on HMS Wallace and HMS Whelp.

A life of Royal service

Following his marriage to Princess Elizabeth in 1947, and her coronation as Queen in 1953, Prince Philip supported the monarch in the performance of royal duties. He served as patron of over 800 societies, including the World Wildlife Fund, the British Heart Foundation and the International Equestrian Federation.

In 1956 he established the Duke of Edinburgh Award, which has given young people opportunities to develop new skills; many students of St Catherine’s have been among them. In academia, he served as Chancellor of the universities of Cambridge, Edinburgh, Salford and Wales, and was also an Honorary Fellow of University College, Oxford. 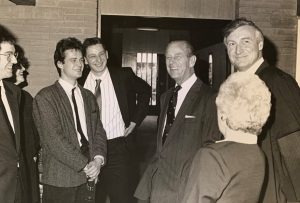 As official Visitor to St Catherine’s College, Prince Philip established a strong relationship with our community.

Over the course of nearly 60 years, the Prince visited the College on several occasions. At such events he would meet the Master and representatives from the Junior, Middle and Senior Common Rooms, officially open new buildings, partake in dinners in the dining hall, and enjoy the gardens.

The prince’s interest in, and admiration for, the College can be clearly seen in his correspondence.  In a letter sent from Buckingham Palace on the 25th anniversary of the foundation of the College in 1989, he explained that he was ‘proud to have been Visitor ever since the beginning’.

The thoughts of everyone at St Catherine’s are with Her Majesty the Queen and the Royal Family at this time.

Main image: HRH Prince Philip with the then Master of St Catherine’s Professor Brian Smith, taken at a visit to mark the College’s Silver Jubilee on 3 March 1989.