Catz Fellow ties himself in unknots

Professor Marc Lackenby, Catz Fellow and Professor of Mathematics, has announced a breakthrough in the branch of mathematics known as ‘knot theory’.

Marc’s new algorithm determines whether a knot is an ‘unknot’ – meaning that it can be moved around to form a round circle. But what is unique about his new algorithm is that it runs in ‘quasi-polynomial’ time, so is much quicker for more complicated knots than any current algorithms.

The new algorithm may support advancements in the scientific understanding of how DNA acts within cells, or even goings on in outer space.

Imagine a piece of rope and tie it into a knot. Then, glue the two ends together, so it becomes one single, continuous length. This is a physical example of what mathematicians call a ‘knot’.

If you place this three-dimensional, knotted rope on a flat surface and take a photo, you will have a two-dimensional image of your knot – similar to the images below. 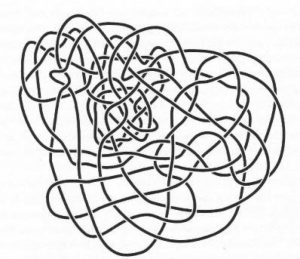 If these can be moved around to form a round circle, then these are ‘unknots’.

The unknot question was first formulated by Max Dehn in 1910 and was discussed by, among others, Alan Turing, in his final published paper. A number of unknot-determining algorithms have been presented in the 60 years since the first was given, by Wolfgang Haken in 1961.

Marc’s algorithm, though, runs much quicker than all previous algorithms and so is a significant advancement in the field. It was outlined by Marc in a seminar at the University of California, Davis – and you can watch a recording of the seminar online, and view the presentation slides for the talk here.

News of the algorithm was also featured in New Scientist magazine and Marc was interviewed on the BBC World Service (listen from 48:20).

Professor Marc Lackenby teaches pure mathematics at St Catherine’s and the University’s Mathematical Institute. His research interests lie in topology, geometry and group theory and his work focuses on 3-dimensional spaces, which are currently a very active area of research internationally. These have links to many different branches of mathematics, including non-Euclidean geometry and geometric group theory.