Catz alumnus John Ramsay (2003, Modern Languages & Linguistics) is the co-founder of socially responsible company Shift8*, which he launched in 2016 with the aim of changing the lives of those living with cognitive challenges, their families, and those that care for them.

After leaving St Catz and working as a corporate lawyer for a number of years, John had begun to search for something to focus on that had greater personal meaning to him. He has a very close relationship with dementia, having cared for his father whose dementia journey started when John was just 12, and founded Shift8* after meeting Hester Le Riche, the creator of ‘The Magic Table’. The Magic Table, which went on to become Shift8*’s first product, is a series of interactive light games projected onto a table which encourages people with mid-to-late stage dementia and learning disabilities to participate instinctively with their surroundings to stimulate physical, cognitive and social activity.

“Seeing those living with dementia play and interact with the games is a huge motivation to myself and the team,” John told us. “We see phenomenal interaction when grandchildren visit, resulting in more family visits, and this benefits everyone. It also gives staff a unique activity to help enhance the care they offer and activities they run. Ultimately, it’s making a very real difference to some of the most isolated in society.” 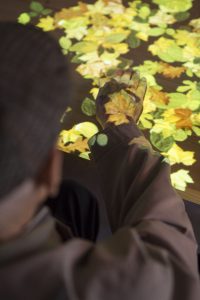 Since Shift8*’s launch, the Magic Table has been installed in care homes, hospitals, libraries and a variety of community spaces across the UK, reaching nearly 10,000 people, with the company having celebrated their 500th installation in April 2019. On his vision for the company going forward, John says: “I want to continue to grow and expand our business, reaching more socially isolated and lonely people across society and developing a fantastic team of like-minded people to help achieve that. I also want to evolve what we do and, eventually, introduce additional products to further increase the impact we’re having.”

“My time at Catz prepared me in many ways for the work I do now: it helped provide a great network of people that have supported me to change career paths, gave me the confidence to do something that I genuinely cared about and gave me training to think through problems and issues. My dad also passed away during my final year at Catz, so there was some added motivation towards the end of that year to get through the exams and set things up for the future.”

For more information on Shift8* and the Magic Table, visit their website: http://shift8.co.uk/